Saving humanity from extinction is synonymous with agricultural biodiversity.
Condemning product privatization, exchanging crops – these are acts of resistance and survival.

Sculptural stone in the Municipality of Pesche (IS)

Since 2015, this project has protected and seen to the repopulation of the Turchesca potato, through a collaboration organized by Andrea d’Amore with farmers in the territory of Pesche (IS), the Poggio di Dante Farm in Casentino (AR), the Agricola C.A.C.C.A in Marzabotto (BO) and the Agriculture Department of the University of Florence. The production and distribution of beer produced with these potatoes will be economic support for the farmers. The project’s manifesto brings together the points of view of scholars from different disciplines regarding the issues d’Amore deals with in the project: genetic erosion and the privatisation of production. 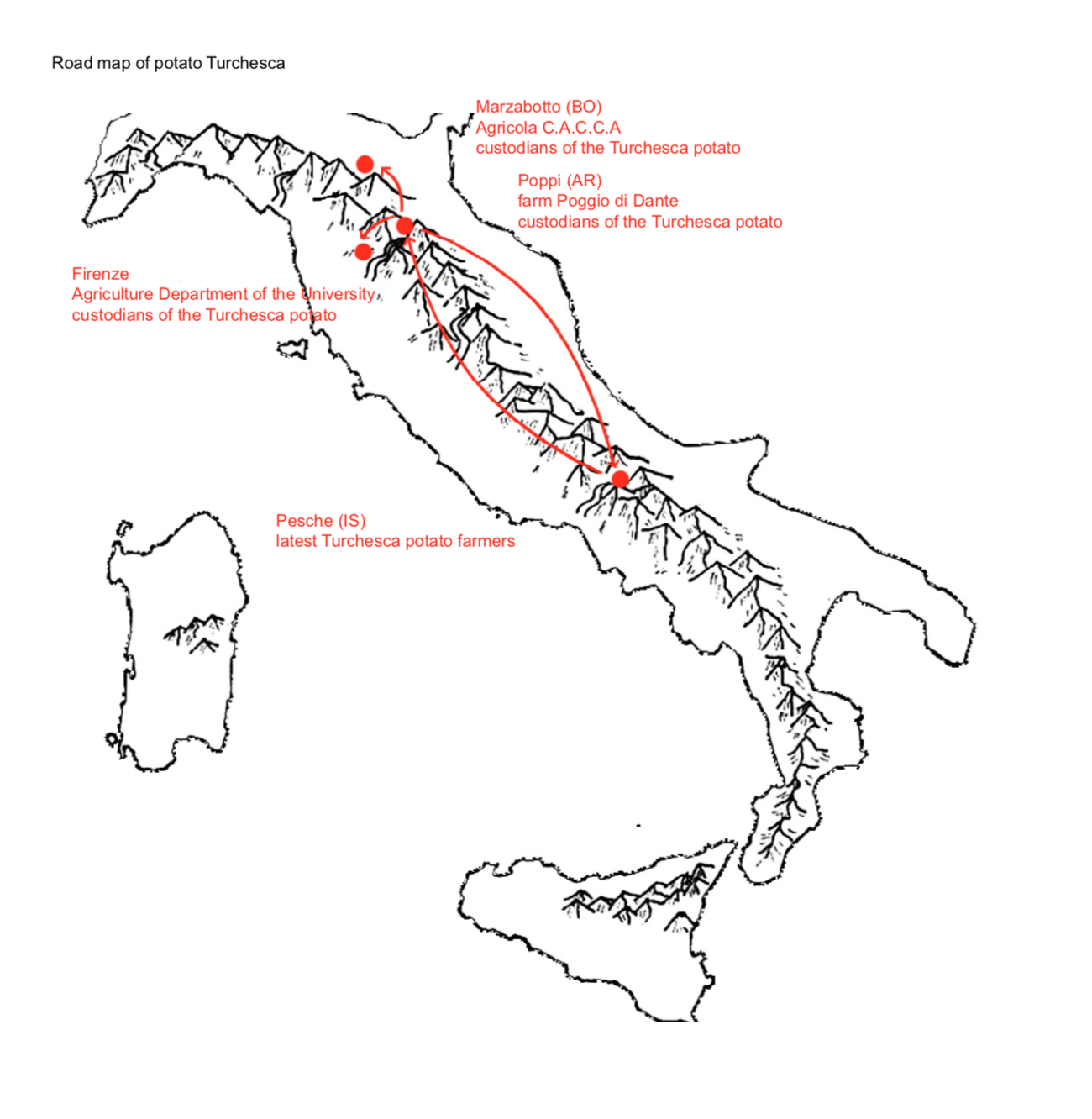 With “Dieci passi dall’erosione genetica” (Ten Steps from genetic erosion) Andrea d’Amore’s work/action brings forth a lucid and complex reflection on the loss of our natural genetic diversity and the underlying state of agricultural policies as observed through art’s selective filter. This attempt to resist the dematerialization of local farming traditions becomes in itself a living breathing form, a philosophy of action, condemnation and synthesis. The Artist’s undertaking shines a new light on a rare species, revitalized in its meaning through an analytical process, and its ability to breed new resources, economic developments but above all community. In other words, its power in jumpstarting a number of relational and social dynamics. Everything first began in a specific geographic context – the village of Pesche in the province of Isernia – with a very specific vegetable – the Turchesca potato – discovered by the artist during his investigations, explorations and encounters in the area. The term “Turchesca”, which means foreign and stranger, went hand in hand with the idea of an artistic process intended as a dynamic, almost pirate like, foray into the very heart of this land turned into a vital and harmonious event thanks to d’Amore’s in depth interrogation. After discovering this peculiar crop on the terrain of “Villa Argia” owned by Mario, one of the last growers of this unique tuber, the artist also involved master brewer and Pesche resident Biagio Sannino, owner of a micro-brewery, and went on to creating a Turchesca potato beer: the “10 PASSI” (10 STEPS). After a first limited edition of numbered artist pieces, which will probably entail the production of two annual batches, the commercialization will guarantee he recolonization of the Turchesca and the widespread diffusion of the artist’s message, as well as its sustainability. This operation is embodied by the bottle, object designed by the artist in a tuber like shape whose surface bears a concise message. The future also holds the possibility of a wider production in order for the beer to become a catalyst for moments of sharing, socializing and genetic preservation. The potato, also planted in Casentino on the premise of the Fattoria Poggio di Dante in Poppi, will guarantee a more numerous production in order to avoid all temptations regarding branding and privatizing. The packaging that envelops the bottle was also conceived as a small terrarium able to grow seeds, fertilized by the poster’s 100% natural paper manufactured in Sri Lanka with elephant dung and screen printed with organic pigments.

Therefore whoever buys the artistic object becomes the custodian of a genetic and artistic identity able to fertilize the earth with its ideas and bear witness to the work and the sense of the underlying message. Activating a functional discussion on biodiversity and production privatization is one of the project’s main development objectives. This kind of debate could foster moments of conviviality or festive events, both intrinsically bonded to agricultural and community values, and could therefore safeguard the preservation of its diversity and reallocation within the territorial context, in addition to creating a useful tool for social analysis. Through his artistic/culinary invention, d’Amore shifts between global- local, sacred-profane, tradition-evolution and therefore rediscovers the concept of ritual, for its very foundation is based on the creation of trust and ontological certainty and it is considered a totalizing and stabilizing moment for the entire community.

The art piece/action is also “political” since it studies and investigates the entire civitas by traveling on a parallel, specular level that reveals itself more truthful than the politics that should act within and on these contexts in order to protect property, variety and local businesses. From this standpoint, “Dieci passi dall’erosione genetica” is also influenced by the principles of biopiracy according to which biodiversity, key in the development of sustainability and sustenance, has an independent and precious value that positions it outside of a market more and more asphyxiated by intellectual property.  The project’s strength is in the rarity and uniqueness of its raw material, which is deeply rooted in its territory but also on the verge of extinction, while the underlying message is directed towards GMOs, consortia, brands and community regulations that tend to “tame”, civilize and normalize productions. The exclusivity of the product (pure craftsmanship, excellence, limited production, high quality and positive user experience) leads to a conscious choice on behalf of the customer who establishes a relationship with an “artistic gesture” that explores all of the material’s potential through an action that is both creative and subversive.

Entering the market is therefore a fundamental step for the project and its activist nature for it will allow a continuity in its production and the widespread promotion of its message. The genetic aesthetic preservation eliminates the spurious logic of monetary value and through the active use of sensitivity (the five senses: tasting the beer, observing and touching the bottle, listening to its sound and taking in its aromas) it opens up a vast “political” space that denies power’s tendency to simplify complexity while contemporaneously echoing the memories at its source. The potential of diversity and the infinite combinations of its (artistic) ingredients determine the creation of a network, the regeneration of representation, the inversion of market trends, “creative” consumption and the possibility of something different. The Turchesca potato is both pretext and alternative, the catalyst for an aesthetic action that offers concrete solutions to industrial agricultural policies through the deconstructed, anarchist filter of contemporary art. The artist’s main goal is to arouse the “unexpected”, drive resonating waves through the very concept of agricultural production that isn’t considered as a final product but as a form of abstraction, of psychic, scientific and ethical manifestation. It is, all in all, a symbolic and magmatic representation of reality, a translation/construction/transformation built through the exchange and contact with an all encompassing natural order of essence and vital alternative. “Dieci passi dall’erosione genetica”is the artist’s journey in time and space through creativity and constructiveness, a hybridization where aesthetic and scientific (empirical) experiences are seen as both fundamentally cognitive. It is the consciousness/ knowledge of an“ecology” that shows that nothing exists unhinged, that everything can coexist both on an ideal level of representation and as a functional relation. It is the difference between consumer capitalism and shared economy, the crisis on the horizon and the art of hanging on, of fighting back, enduring and evolving.

Scialuppa di Dante. Beginning of the repopulation of the Turchesca potato. Plant and crops from 2015 to now 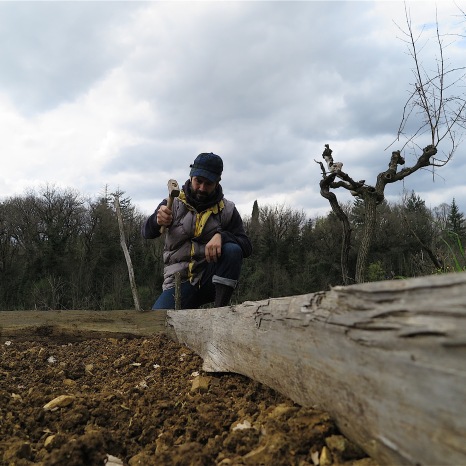 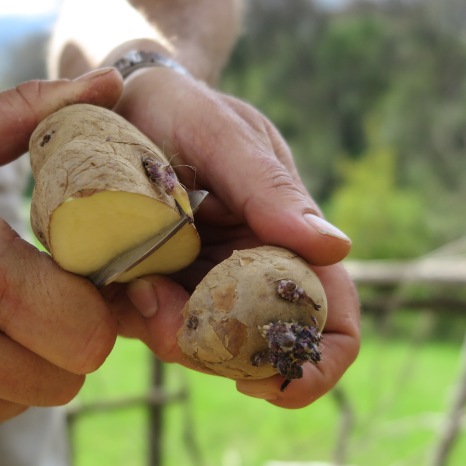 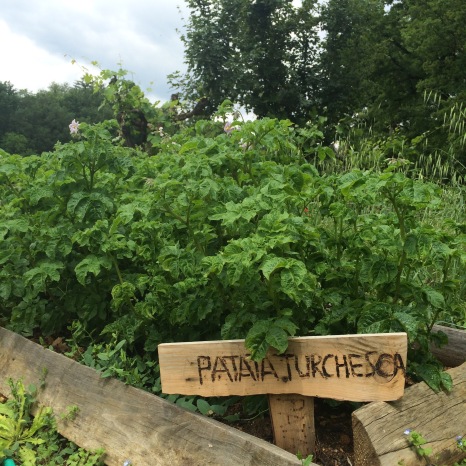 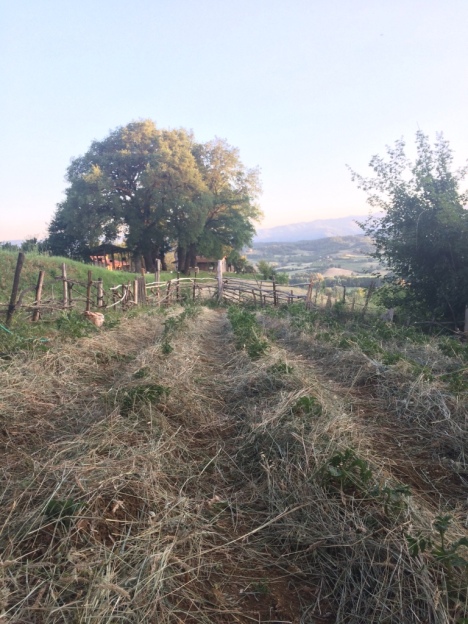 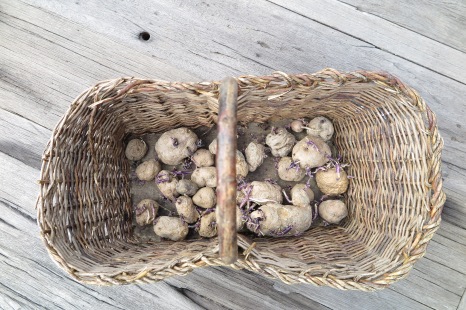 Transplantation in Casentino (AR) and collection 2016

Compost ideas poster of the project. The flag is a seed that breaks through a chain of chains 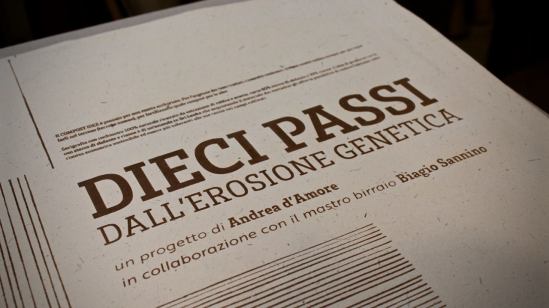 COMPOST IDEE was not conceived to be archived. Given the urgency of its topics, the concepts must be immediately transmitted before they liquefy and join with the soil (the human soil) as a compost, organic and vital fertilizer for ideas. This screen print was made with 100% natural ink of acacia and madder while the paper consists of 80% elephant dung and 20% paddy rice. The idea of producing this peculiar paper was introduced by a manufacturing company based in Sri-Lanka: by purchasing materials directly from the farmers they encourage them to see the elephant as a sustainable economic resource, which therefore also makes them more lenient towards the animal during its crop raids. 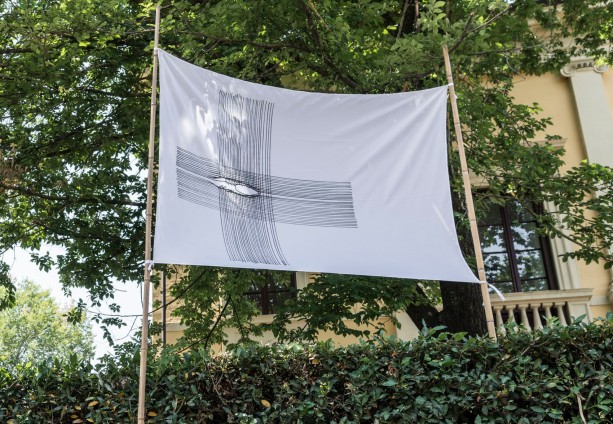 Potato beer. Support for farmers and dissemination of thought 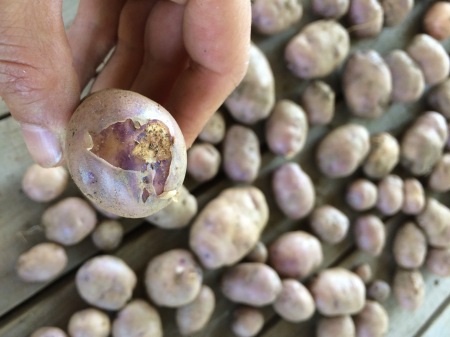 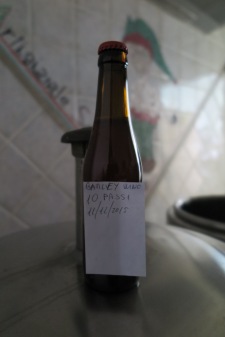 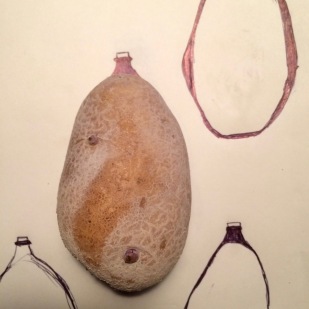 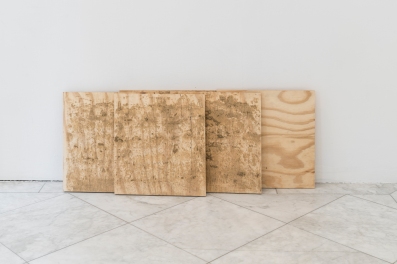 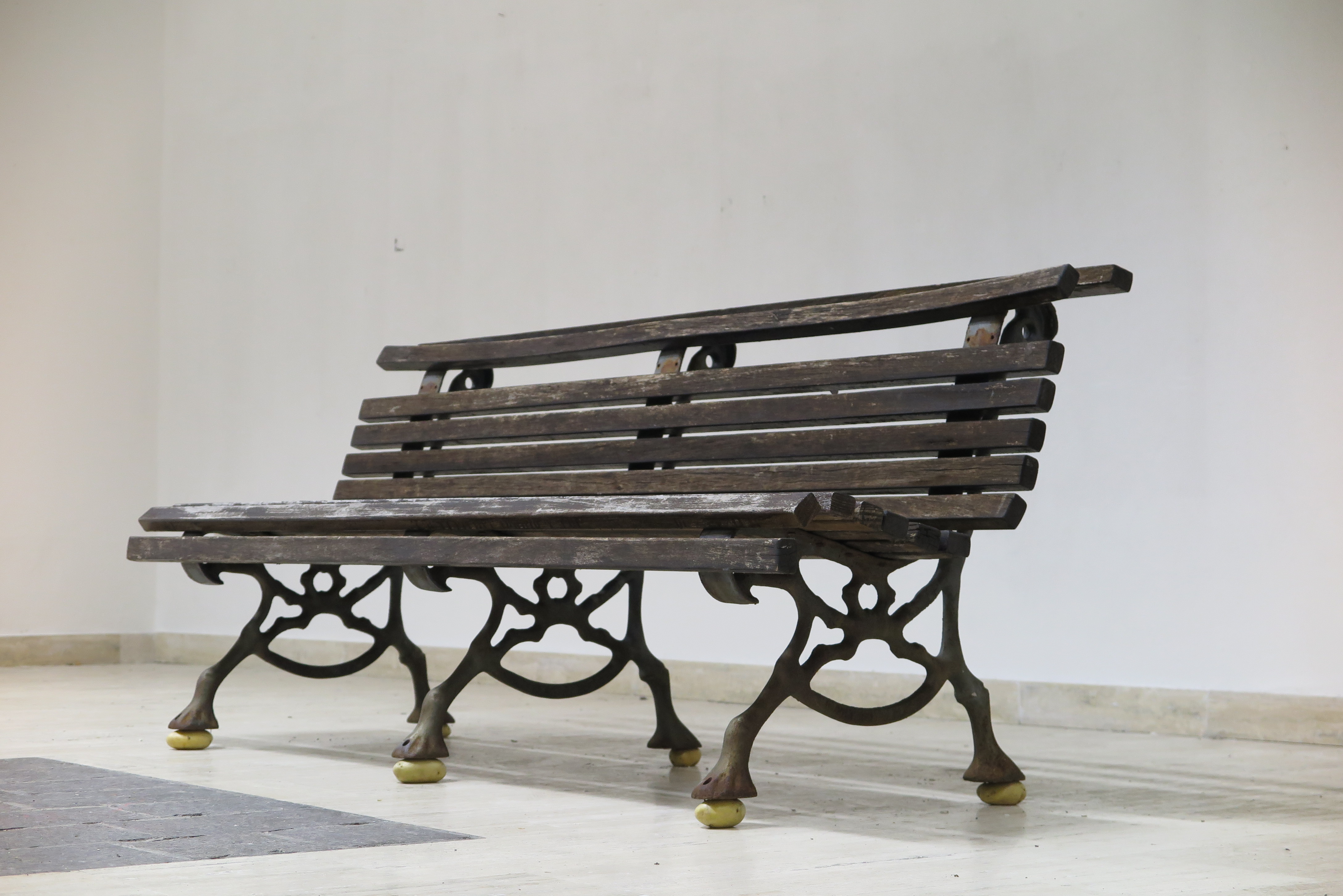 Installation at Municipality of Pesche IS